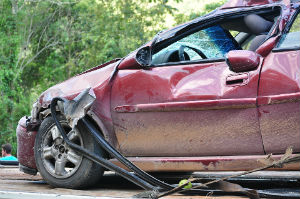 Raleigh police officials reported that the teenager was driving 20 miles over the speed limit at the time of the crash. Then, the driver lost control of the car and caused a head-on collision.

Additionally, the police reported the driver was going 65 mph in a 45 mph zone.

Officials said the accident took place on New Bern Avenue. Specifically, this is east of Raleigh.

Officials identified the driver as Willow Spring resident Daniel Lamon Bryant. Additionally, official said he was driving his family’s Toyota Camry. Then, he drove across the median into the eastbound lanes. Moreover, police added this is when he collided with a Chevrolet Equinox. This occurred east of Rogers Lane.

Horrifyingly, the Camry spun and caught on fire.

Bryant was injured in the collision. Furthermore, he had two passengers in his car. Knightdale resident Jakya Elaine Moore and Raleigh resident Jordan Miller were also injured.

Eyewitness Bryson Stevens was driving behind the Camry when the accident happened. He commented, “Once I saw that happening, I said, ‘God’. Somebody else was in a utility truck or something. He comes over with a really large fire extinguisher, and without that, this boy [Bryant] would absolutely had the same fate as my brother”.

Stevens revealed his brother died in a car crash. He added, “It was horrifying. It reminded me of my brother’s accident. It was the exact same scenario.”

The four victims are currently at WakeMed receiving treatment.