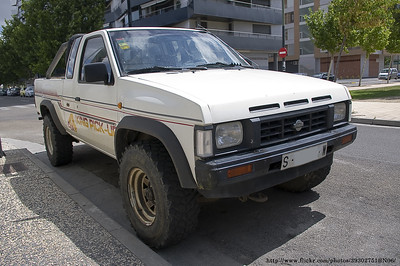 The Nissan King Cab was a great starting vehicle for me. I’m 30 years old. I have owned 10 cars since I got my license. Depending on who you are, that might be a lot, or that might be a little. With not having a lot of money by the time I could drive, I bought whatever cars I could get my hands on. My second vehicle was my dad’s old 94 Nissan King Cab and that was one of the most fun vehicles I had ever driven.

For a front-wheel-drive pickup truck, there isn’t a lot you can do…or is there? This was the perfect entry vehicle for me to start working on. My first car was a Toyota Carolla that I bought from my sister when I first got my license. She never took care of it, so I began working on it just to get me to school and back. When that didn’t pass inspection, my dad (who very graciously decided to sell me the King Cab) decided it was time for him to buy a new vehicle. It had passed inspection (barely) and I didn’t have much to lose if I tinkered with it and things didn’t work out. So I put a 6-inch lift on it, bought bigger tires, and turned that little tinker truck into my own personal Warmachine.

For the small truck that it was, I had no problem getting it to go from one place to another. There was a section near my house that was simply a cleared out lot. There was no grass-cutting or any maintenance done, so it was the perfect spot to simply drive off the road, cut through and be home in minutes. This worked approximately 5-times before the cops were informed and a letter was sent to my address asking me to stop. But, while I had that king cab, there was no place that I had a problem getting to. This little guy truly was the “king of cabs.”

While most of my fellow classmates had basic sedans, some had the luxury of wealthy parents. There was a mix of students with any type of car that you could think of. From Cadilac Escalades to the typical 98 Honda Accord, to vehicles like mine and a few others. There was a small crew of us who had some form of a lifted small pickup. My buddy in his Chevy S10 with a lift, my friend in his Ford Ranger, and myself. It was a killer time bringing those trucks down to the powerlines and running them through the mud.

The Only Downside Was That Nissans Rust

I grew up in rural New Hampshire. That means salt and snow have a direct effect on how long your car is going to last. When I first bought the truck there were some rust issues, and I knew I wouldn’t have it a long time, but in the 9-months that I had it, it was a blast. I recommend any father/son duo, to pick up an old Japanese 4-banger pick up and work on it together. They’re easy to fix, relatively cheap to repair and without the hassles of rust, can run forever.