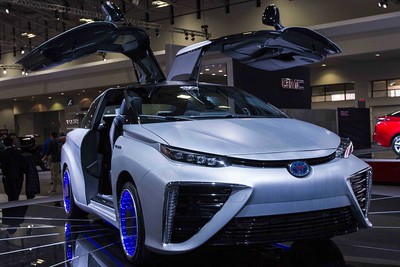 Hydrogen fuel cells have arrived with the introduction of the Toyota Mirai. As a competitive alternative to the first generation of electric vehicles, Hydrogen has proved itself as an able fuel source. With the invention of this as a viable source of energy, comes the question: How does it work? What are the components? Can this beat out the electric car craze currently sweeping the nation?

The science behind the new engine is pretty…science-y. So we are going to try and break it down for you into more basic concepts.

How Does it work?

Hydrogen enters the fuel cell, goes through a process where the molecules are stripped from the oxygen cells, and goes through a lightly heated combustion chamber. This produces the necessary energy to drive the vehicle. Any excess fuel is put back into the rotation and the car produces water as a byproduct. This has come about as one of the most beneficial forms of fuel since the boom of electric.

The first step in powering a hydrogen car is pushing the H2 molecules through what is known as an anode. The anode acts to separate the molecules into positive hydrogen charged ions and negatively charged electrons. The H2 molecules then move through the “membrane”.

The material of the membrane acts as a limiter. Only allowing positive ions to pass through. Ions that have not been charged and are excess are then recycled back into the fuel tank to be run through again. At the same time, oxygen moves in from the other side of the cell known as the cathode.

The cathode then introduces the oxygen to the positively charged ions. The end result is simply water. This is where many car manufacturers are pushing the use of this widely available energy source.

The results are a more environmentally sound vehicle that has even less impact on the surroundings than an electric car.

The answer is yes. Hydrogen-powered vehicles work hand in hand with electric vehicles. In very similar ways to a hybrid, the methods of utilizing hydrogen act as a replacement for fuel. The idea is that the fuel powers the battery in order to propel the vehicle. Where electric cars typically rely solely on a battery, hydrogen cells extract one of the most abundant recourses in the universe in order to harness enough power to get you from point a to point b.

How It Holds Up To The Current Electric Market

This industry might be hard to push a wedge in. Especially since most automotive manufacturers have presented their first lines of all-electric vehicles. The market has shifted away from the use of fossil fuels and has now established a more environmental approach. Unfortunately, some of the more recent additions to the electric market have proved electric is here to stay. With GM releasing the HUMMER EV, with its whopping 1,000 hp, the push for electric has established more powerful markets. Although the technology is there to innovate, it lags behind in terms of productibility, fuel stations, and power. At the current state, it’s not as powerful as electric. Fortunately, the promise of innovation is spearheading newer and more effective fuels.

I would not count out the prospects for hydrogen fuel. As one of the most abundant resources in the universe, the benefits are astounding.