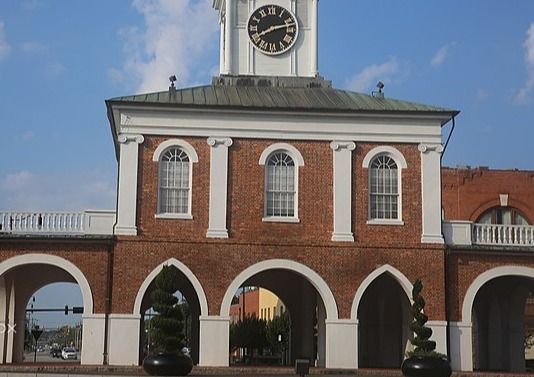 A group of Fayetteville protesters camped out in front of the Market House with a list of demands. Within just 48 hours, the city began working to compromise with them. These dozen protesters call themselves “The Ville’s Voice” and intend to stay until all five of their demands are met. They have seen some resistance from fellow citizens but met this divide with calm discussion.

The Ville’s Voice claims it found inspiration in the Durham protests. There, the police department arrested four people that had been camped outside of their headquarters for a week. “The Other America Movement”, as they called themselves, blocked the street directly outside the building. They refused to move until the city redistributed partial police funds to other community projects. After shutting down the Durham Freeway, they scored a meeting with the County Sheriff in order to sit down and talk strategy.

The Ville’s Voice listed five demands. Among those demands are calls for a community center and garden, an internal affairs department removed from the police department, and a citizens review board. They understand that the police may arrest them for their camp out but accept that that is part of the protest.

Already, Mayor Mitch Colvin seems ready to listen. “There’s been investment in other parts of the community. There’s been a lack of investment in the minority communities. At the end of the day, that’s the conversation that we need to have,” he stated. He recently proposed turning the Orange Street School into a community center, which would meet one of the five demands.

However, not everyone in Fayetteville feels warmly towards the protesters. Tension arose when protesters and a police support march crossed paths. Still, people on both sides of this debate show good faith and grace in some instances. Sharman Tober, a Trump supporter who doesn’t see eye-to-eye with The Ville’s Voice wound up in a confrontation with the group. But instead of resorting to violence or shaming, they invited her to sit with them Thursday afternoon and talk. Protesters offered her a water bottle and insight into their cause.

At the end of their discussion, Tober said: “We’re not black. We’re not white. We are not red. We’re not blue, green or whatever. We are human and until we realize we’re human people and we have to live together as humans, you can’t solve any of these problems.”