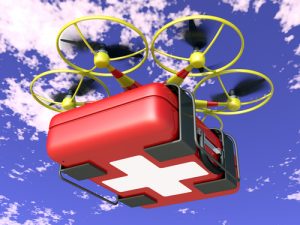 Recently, the government approved a project that the North Carolina Department of Transportation is working on. The project involves testing out drones to deliver medical supplies around the state.

The government received over 200 applications. Out of all those applicants, NCDOT was one of the 10 that got accepted. The Federal Aviation Administration loved NDOT’s proposal. NDOT is now a part of the “Unmanned Aircraft Systems Integration Pilot Program.” This program was initiated by the Trump ministry and works toward testing drones. Their goal is to make the use of drones safe enough to deliver supplies all over the nation.

NCDOT has been working towards setting up a system of distribution centers with the help of some private companies. They want to use these drones to transport things like blood or other types of medical necessities faster. Zipline, Matternet, and Flytrex are drone delivery corporations that work in other countries except for the U.S. PrecisionHawk of Raleigh is another company working with NCDOT to start tracking the active drones. Apple is also involved in this project to upgrade Apple Maps for North Carolina. However, Apple is concerned these drones might cause an invasion of privacy for some people. They are making sure to blur out faces and license plates to protect people’s privacy before they release the new aerial images.

The leader of the Innovations Department at WakeMed is a surgeon named Stuart Ginn. He argues that having medical supplies shipped will make everything faster and cheaper. The way medical supplies are transported now is by trucker delivering them from one place to another. However, these drones will speed up the process. With over 70 facilities in the Wake and Johnston counties, WakeMed is the first system that is being used for testing these drones in North Carolina’s program.

By working with companies like Apple and using systems such as WakeMed, NCDOT and UAS will be able to do what Zipline has been doing overseas. They will have a huge impact in the medical field and the project will start using the drones in August.

Become one of the Best Drivers at Your Company

Ferrari 812 Competizione 2022 Model Is One For the books