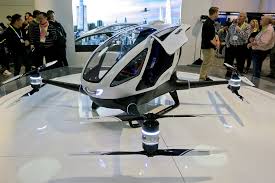 Chinese company EHang, in coordination with state and local officials, tested their driverless air taxi on Tuesday for the first time in the United States.

Those in attendance included Governor Roy Cooper, state lawmakers, and North Carolina Department of Transportation heads. In addition, EHang’s co-founder Derrick Xiong presented the craft to the crowd. The craft, known as the EH 216, consists of sixteen sets of electric motors and propellers designed to lift a central cab into the air.

The craft travels up to 80 mph along pre-programmed routes. The EH 216 weighs 600 lbs, with an additional carrying capacity of 500 to 600 lbs of cargo or passengers. However, its test flight involved no human trial.

The Federal Aviation Administration has yet to permit autonomous craft to carry human passengers. Therefore, NCDOT treated the demonstration like an air show. Spectators kept a distance of 500 feet and emergency vehicles remained on-site, just in case. Yet, despite a brief delay, EHang’s demonstration of the model EH 216 driverless air taxi performed as expected.

This demonstration further solidifies North Carolina’s willingness to embrace drone technologies and incorporate into their commerce. Eventually, the FAA will authorize a human trial and North Carolinian officials hope to host that, as well.